You are currently in growzone:

The Pyramidal Arborvitae is a product of its parent plant the White Cedar. This special cultivar was found growing in the wild and due to its strong characteristics has been cloned ever since. It is a medium growing (1-2ft per year) that has dark green soft foliage. In September and October of each year it “sheds all the growth that grew out the previous year and drops to the ground. Its parent plant is a native to the northern US where it grows extensively and some fine large specimens can be found on Mackinac Island on Lake Heron in Michigan.

The Pyramidal Arborvitae will grow 30+ft tall and 5+ ft wide and has a shallow spreading root system. Have seen old species of this plant in cemeteries that had to be over 70 years old so does have a long life. Age limiting factor is usually how close they are planted together as close planting and dry weather will shorten life considerably. This tree has multiple leaders and some damage to the top of the tree in ice and heavy snow just lets one of the other leaders take over so the effect is minor in the windbreak, many people have tied the leaders together and also works fine. As with all arborvitae species deer will eat this species in the winter but trees are rarely killed as new foliage can sprout from the branches even if no green is showing. Repellant, fencing or bullets may have to be used in heavy deer areas.

The Pyramidal Arborvitae grows well in hardiness zoned from 3-6 and likes over 25” of rain per year in areas with adequate soil to hold moisture during the dry months. Does not do well in sandy soil as has a shallow root system and should not be planted there. Will grow well in high PH soils and in clay soils and soils with extra moisture. Needs at least 1/2 day of sun to grow well.

No serious disease problems except some spider mites in a hot dry summer on stressed trees.

We highly recommend the Pyramidal arborvitae with certain restrictions. It should not be planted in the direct wind but used as a single row windbreak in town or as a row on the inside of the other windbreak trees. Have seen deaths due to cold drying winds in the winter when planted in the direct wind out in the country as with all arborvitae species except the Techny. The Techny Arborvitae, which is very wind and cold resistant should be used in these cases.

The drought we had in 2012 was hard on the arborvitaes, but most did OK unless there was another problem. There was a row of these and the middle of the row had died. The soil was good the whole length so what happened? If you look behind the Pyramidal arborvitae you will see a tree sticking up. It is a hackberry and hackberry have what I call adventurous roots that go out a long way from the trunk. What happened the roots from the hackberry went over to the Pyramidals and took any extra moisture away from the roots, causing death. No arborvitae like dry weather and especially if they are by other trees that they have to compete with for moisture. A soaker hole used once a month on the Pyramidals during the summer drought could have prevented this situation. 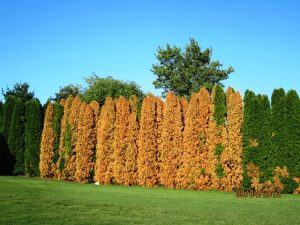